Dr. Rolf Landua is a Senior Research Physicist at CERN. He got his PhD in physics from the University of Mainz, Germany in 1980, and was the co-initiator of the antimatter factory (AD) as well as the spokesperson of the ATHENA experiment that produced millions of antimatter atoms in 2002. Since 2009 he has been responsible for CERN visits and exhibitions, and is now CERN’s head of Global Engagement with a passion for inspiring young scientists. 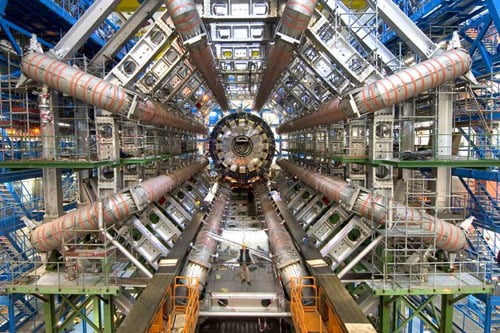 CERN and the LHC

CERN is the acronym for the French “Conseil Européen pour la Recherche Nucléaire”, or European Council for Nuclear Research. It’s a world-class fundamental physics research organization in Europe that was founded back in 1952, and facilitates research with over 13,000 visiting scientists from over 70 countries with over 100 different nationalities.

This multicultural and interdisciplinary environment (much like LIYSF) brings together all kinds of perspectives and facilitates new and innovative ideas.

The Large Hadron Collider (LHC) is the epitome of this incredible international collaboration, and a cutting edge, technological behemoth responsible for majority of the frontier research at CERN. It’s 100 meters underground, (27 kilometers in circumference) and can accelerate particles to speeds approximating the speed of light and collide them in as little as 20 minutes.

Where do particles come from?

E=mc^2 is perhaps the most famous physics equation of all time, and shows us that matter and energy may be converted to one another and matter can be created if a large amount of energy is concentrated in a tight space.

Physicists have done this, and what they observe is that whenever matter is created there is almost an equal amount of antimatter also created. Just like positive and negative, up and down, left and right – antimatter and matter exist together, two sides of the same coin, and never one without the other.

Through studying the composition of stars and the expansion of the Universe the current scientific consensus is that everything in the Universe expanded out of a single, infinitesimally small point 13.8 billion years ago – scientists call this the Big Bang.

It’s hypothesized that at the moment of the Big Bang a huge amount of energy was transformed into mass, and that the initial universe must have contained equal amounts of matter and antimatter. Then fractions of a second later the matter and antimatter obliterated each other, releasing an enormous amount of radiation.

Dr. Landua explains how there was a slight asymmetry in the antimatter-to-matter ratio in those initial conditions, and that’s the reason why we have a Universe filled with matter today (and the reason why you feel so tired in the morning):

“The universe was much smaller and much hotter in the past, and so we know that there must have been something called the Big Bang.”

Unsolved Mysteries (For you to solve)

In 1897, the first elementary particle was discovered; the electron. Since then, thanks to bright physicists and cutting-edge technology such as the LHC, our understanding of atoms and particles has evolved enormously, and physics has now identified a slew of particles which make up what which we call the Standard Model.

The Standard Model is a good start, but Dr. Landua emphasized in his lecture that there are many more questions to be answered (and that perhaps the students might want to get thinking about them), and perhaps far too many for him to answer in his lifetime, and so he presented the following problems to our participants:

“So I’ve made a short list of questions for YOU, okay? You [students] can answer them.

Why are there three families of particles?

What is the origin of forces? Is there a single very high energy forces which all the other forces come from? A unification of forces?

What is the origin of the different particle masses?

Where is all the antimatter in the Universe?

And for the more esoterically minded people; when you look at the Higgs mass and you calculate the probability that our Universe stays in this state, is there a slight possibility that the Universe comes to a state where the Higgs boson is much more massive, and the Higgs field much stronger, and the masses all go up and we disappear in a big flash?”

These are the profound questions that motivate Dr. Rolf Landua in his research, and he believes that they can be answered with particle physics. They have enormous existential implications, and will undoubtedly take some of the brightest minds to conquer.

There is lots of work left to be done, maybe you can play a part in moving that needle of progress, and using science to understand the universe and to Make Life Better.