Exploring The Universe: With Mark McCaughrean

Mark is the Senior Advisor for Science & Exploration at the European Space Agency (ESA), and is responsible for communicating results from ESA’s astronomy, heliophysics, planetary, exploration and fundamental physics missions to the scientific community and wider general public.

In his plenary lecture at LIYSF, Mark talked to our participants about some of the major work he’s been involved with during the past few years at ESA. Mark captured our minds by fascinating ‘behind-the-scenes’ talks regarding ESA’s technological advancements in the past few years and their future plans for advancing into space.

In 2005, ESA successfully landed the Huygens probe on the surface of Saturn’s moon Titan, making this probe the first ever spacecraft to land on Titan and the furthest successful landing from Earth ever made!

To help you comprehend how far Titan is from Earth, Mark suggests imagining Earth scaled down to about 13 centimeters in diameter (approximately the size of a large ball in your hand).

At this scale, Titan would be around 13 kilometers away from this.

Titan has rivers, lakes, and even rain. These are not made out of water, but of liquid hydrocarbons at an astonishingly low temperature of negative 150 degrees celcius.

It’s a fascinating place to study because these liquid hydrocarbons act as solvents which could potentially facilitate strange forms of life.

However, the environment on astronomical bodies such as Titan are radically different to that of Earth and if we were to find life there, it would be unfamiliar to anything that we have ever seen or could predict.

Looking Back In Time

The Universe is an unfathomably expansive and empty place. Stars are few and far between, which make it difficult to explore.

Going back to Professor McCaughrean’s scale model of the Earth at a 13-centimeter diameter, the nearest star to Earth (apart from our sun) would be from here to the Moon! (approximately s400,000 kilometers away).

It’s estimated that it would take years of travelling at the speed of light (over a 1,000,000,000 kilometers per hour) to get to the star. This is a  something that’s simply impossible with our current technology.

However, we can still study other stars and planets using advanced telescopes.

Why? Because the celestial bodies that we observe are so far away that it takes the light from those objects millions of years to reach our detection devices.

The light that we observe was emitted from the objects in the distant past, so when we study space we are really looking back in time.

If we look out far enough we can actually capture a glimpse of what could be considered the beginning of time, and maybe understand the events that constitute the birth of our Universe.

Measuring The Positions Of Stars

In 2013, ESA launched a satellite called Gaia, which was designed to measure the positions and distances of one billion different stars in the Milky Way galaxy.

Gaia measures the distance of stars using parallax; that is, a technique involving measuring the position of the stars at different times the satellites orbit, and based on the apparent discrepancy between the positions the satellite can calculate a distance.

The technology in Gaia is so advanced and it’s instruments so precise, that it can measure the width of a human hair at over 2000 kilometers away.

The Origins Of The Milky Way

What ESA hopes to do with Gaia is to develop a model of how all of the stars move in the sky and plot their trajectories into the future.

They could use the data to generate a movie, and then run that movie backwards to try and figure out where all of the stars came from and how the galaxy might have formed.

“We’re trying to understand how the Milky Way was put together by different galaxies falling together under gravity, and assembling the big galaxy we are living in today of 200 billion stars.”

What the scientists at ESA noticed when looking through the data gathered by Gaia, is that a particular star (given the name Gliese 710) had no noticeable lateral movement.

This generally means one of two things:

Upon further observation, what they found was Gliese 710 was in fact heading directly towards our solar system.

It’s predicted that in about 1.3 million years, Gliese 710 will pass between 14,000 astronomical units (the distance between the Earth and the sun) of our planet.

Thankfully that’s not close enough to burn us, however the star is predicted to pass right through what’s known as the Oort cloud – a cloud of comets and bits of junk on the outer edges of our solar system. 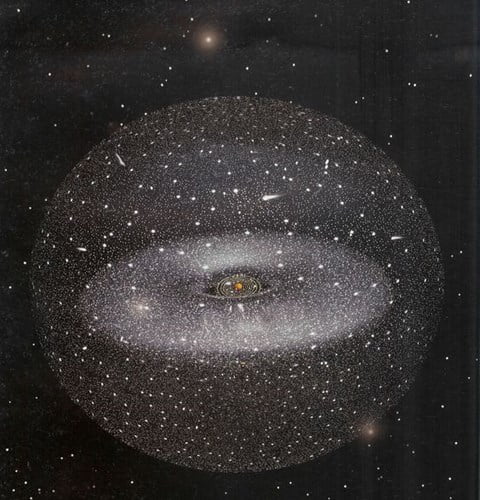 When Gliese 710 passes through that Oort cloud it’s predicted to disturb some comets which will then likely head towards the centre of the solar system, and towards our planet, resulting in approximately 10 new bright comets visible from Earth per year, for 3 or 4 million years.

Space Is Not An Escape

A common question people have when they hear about space exploration is “why”? What good is it to explore space? What problems does it solve? Why are we spending so much money on something that could be seen as irrelevant to our problems here on Earth?

Something incredibly important that McCaughrean emphasized was that the reason we look out into space isn’t to escape Earth, but rather because space is inspiring and by nature, we are explorers.

“We can only explore space if we preserve the Earth that we live on. Space is no plan B. There is no way for us to simply escape the problems that we have here on Earth.”

“Space is cool and space is exciting, but it’s a small part of what we do as humans and we still need to survive on this planet together.”

“I’m concerned with how we can use space as a tool for inspiration and exploration on top of what we have to do here on planet Earth.”

In particular he touched on the idea of pushing to colonize Mars in case of a terrible catastrophe here on Earth:

“People are saying that we should all go to Mars because someday the Earth will suffer a catastrophe… But even if you put a million people on Mars, there are still billions of people on this planet who need to survive as well.”

It was an inspiring presentation and left the participants full of awe. And it’s no wonder, as it’s not every day that you get to listen to a great rocket scientist who is so concerned with solving our global problems, educating young people, and Making Life Better here for us all.

This website uses cookies to improve your experience while you navigate through the website. Out of these, the cookies that are categorized as necessary are stored on your browser as they are essential for the working of basic functionalities of the website. We also use third-party cookies that help us analyze and understand how you use this website. These cookies will be stored in your browser only with your consent. You also have the option to opt-out of these cookies. But opting out of some of these cookies may affect your browsing experience.
Necessary Always Enabled
Necessary cookies are absolutely essential for the website to function properly. This category only includes cookies that ensures basic functionalities and security features of the website. These cookies do not store any personal information.
Non-necessary
Any cookies that may not be particularly necessary for the website to function and is used specifically to collect user personal data via analytics, ads, other embedded contents are termed as non-necessary cookies. It is mandatory to procure user consent prior to running these cookies on your website.
SAVE & ACCEPT
Translate »