David Smith is a Professor of Chemistry at the University of York, conducting award-winning research in the field of smart self-assembled nanomaterials/medicines. He spoke to our participants about the importance of chemistry in biology and medicine as well as the importance of having a strong understanding of chemistry, as this is essential for developing drugs that can safely and predictably interact with the human body.

In his plenary lecture, Professor Smith discussed a range of topics, including how natural medicines such as Cinchona bark were used by humans in the past (containing the antimalarial compound quinine), as well as how we can use biology through processes such as fermentations to assist us in building new drugs and molecules. 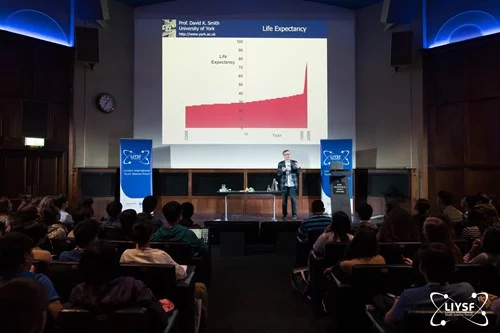 Professor David Smith opened his lecture with a fascinating demonstration of fluorescence in his favourite gin and tonic.

The fluorescence in Professor Smith’s gin and tonic occurs due to a compound found in tonic water known as quinine.

When quinine is exposed to high-energy ultra-violet (UV) light, it absorbs the UV and re-emits the light in our visible spectrum to give off a rather impressive glow. 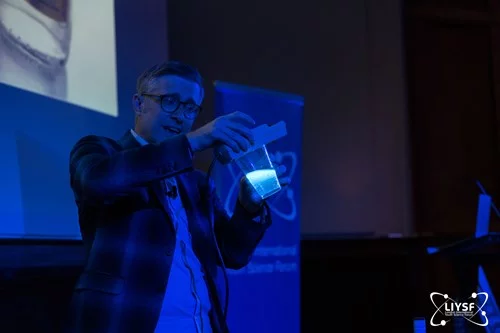 The fact that the quinine in tonic is fluorescent is fascinating, but this isn’t actually the reason that tonic and gin became popular drinks.

Quinine has medicinal properties and was consumed by British officials stationed in the early 19th Century in India to protect soldiers and officials against malaria.

The problem, however, was that quinine alone was extremely bitter and so the British population learned to mix their tonic water (quinine and water) with gin to help improve the taste. Resultantly, the iconic mixture was created or what is known today as Gin and Tonic. 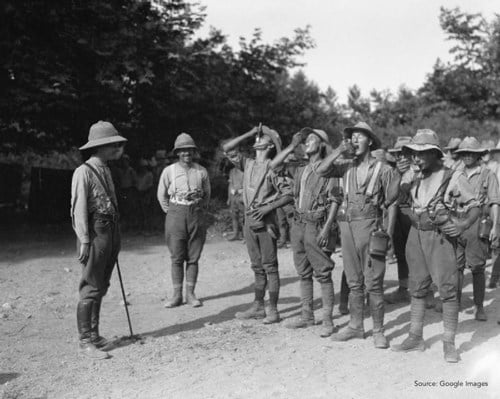 Where chemistry and biology meet

Livers contain the enzyme catalase, which catalyzes the breakdown of hydrogen peroxide into oxygen and water.

Upon pouring the hydrogen peroxide into the flask with the liver, the catalase immediately began breaking it down. Large amounts of oxygen were released which resulted in the balloon blowing up.

This experiment was exciting to watch, but it also served a symbolic purpose in Professor Smith’s lecture. The reaction between peroxide and catalase in the liver is an example of a great situation where chemistry and biology meet.

The study of enzymes (catalase) is largely a biological domain (enzymes are proteins that are large biomolecules), whereas the study of molecules such as peroxide (tiny in comparison to proteins) best fits under the category of chemistry.

Studying the overlap between these two fields is critical for developing new drugs and combatting the common worries in modern medicine. 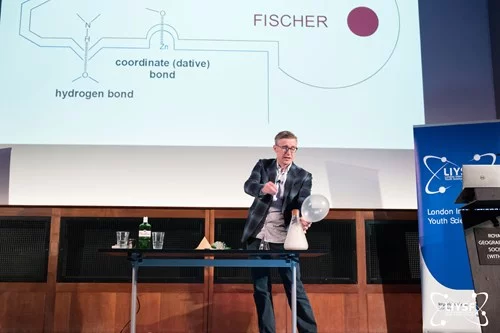 One of the biggest worries in modern medicine

Bacteria are becoming increasingly resistant to modern medicine. One, particularly concerning example, is Methicillin-Resistant Staphylococcus Aureus (MRSA). MRSA is already resistant to many of the common antibiotics we have at our disposal.

One of our best solutions to the problem of resistant bacteria is called vancomycin which is a potent antibiotic that is only used as a last resort.

It’s worrying to think that bacteria once did become resistant to vancomycin through a small mutation in the cell wall, preventing the vancomycin molecule from binding to the cell.

However, in 2006, Dale Boger’s group from America developed a vancomycin analogue by changing a single atom in the structure of vancomycin (shown below).

The synthesis was an incredibly difficult task and involved more than 42 two processes, along with the integration of biological processes such as fermentation:

“In the patent, Boger used fermentation, which is a biological process. He messed around with lots of different types of fermentation until he found something that played around with just the right atoms on the molecule.”

“A big theme in chemistry going forwards is using biology to help us do synthesis.”

With the help of Professor Smith, LIYSF concluded that it is vital for chemistry and biology to work together. Biology is undertaken to understand the inner workings of the body and bacteria and chemistry help to manipulate those mechanics with atomic precision in order to have the desired effect that we want.

Professor Smith’s presentation was eye-opening to LIYSF and showed them the importance (and power) of integrating chemistry and biology. It gave them an insight into the importance of cross-disciplinary when helping to solve the world’s problems in accordance with the LIYSF 2017 theme of ‘Making Life Better’.