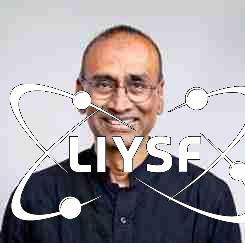 Nobel Prize winner and former President of the Royal Society, Sir Venkataraman “Venki” Ramakrishnan, gave the Key Note Opening Address at the 61st LIYSF 2019. He is an Indian-born British-American structural biologist well known for his research as the group leader at the Medical Research Council, Laboratory of Molecular Biology on the Cambridge Biomedical Campus, UK.

Prof. Venki was born in 1952 in the Indian town of Chidambaram in Tamil Nadu. He earned his B.Sc. in Physics in 1971 from Maharaja Sivajirao University in Baroda, Gujarat and later migrated to the US to continue his studies, subsequently earning in PhD in Physics from Ohio University. Later, he worked as a graduate student at the University of California, San Diego, from 1976 to 1978. As a postdoctoral fellow at Yale University, he worked on a neutron-scattering map of the small ribosomal subunit of E Coli.

Prof. Venki continued to work on ribosomes from 1983 to 1995 as a staff scientist at Brookhaven National Laboratory. In 1995, he moved to the University of Utah as a Professor of Biochemistry, and in 1999, he moved to his current position at the Medical Research Council Laboratory of Molecular Biology in Cambridge, England, where he had also been a sabbatical visitor during 1991-1992 on a Guggenheim Fellowship.

In the August 2000 issue of Nature, Venki, along with his colleagues, published the structure of the small ribosomal subunit of Thermus thermophilus, a heat-stable bacterium related to one found in the Yellowstone hot springs. With this 5.5 Angstrom-resolution structure, Prof. Venki’s group identified key portions of the RNA and, using previously determined structures, positioned seven of the subunit’s proteins.

This was followed by studies that provided structural insights into the mechanism that ensures the fidelity of protein biosynthesis. In 2007, his laboratory determined the atomic structure of the whole ribosome in complex with its tRNA and mRNA ligands. Since 2013, he has used cryo-EM to work primarily on eukaryotic and mitochondrial translation. He is internationally recognised for his significant contribution in this domain.

Venki was elected a Member of the European Molecular Biology Organization in 2002, a Fellow of the Royal Society in 2003, and a Member of the U.S. National Academy of Sciences in 2004. In 2007, Ramakrishnan was awarded the Louis-Jeantet Prize for Medicine and the Datta Lectureship and Medal of the Federation of European Biochemical Societies. In 2008, he won the Heatley Medal of the British Biochemical Society.

Since 2008, he is a Fellow of Trinity College, Cambridge and a foreign Fellow of the Indian National Science Academy. In 2010 he became a member of the German Academy of Natural Sciences Leopoldina. He was elected an Honorary Fellow of the Academy of Medical Sciences and Sommerville College. In 2020, he was elected to the American Philosophical Society and in the same year, he became a board member of The British Library.

In 2009, Venki was awarded the Nobel Prize in Chemistry for his pioneering work on ribosomal structure and function, which he shared with Thomas A. Steitz and Ada Yonath. The very next year, he also received India’s second highest civilian honour, the Padma Vibhushan. He was knighted in the 2012 New Year Honours for services to Molecular Biology.

He has also been awarded the Sir Hans Krebs Medal, the Louis-Jeantet Prize for Medicine, the Datta Lectureship and Medal of the Federation of European Biochemical Societies, the Heatley Medal of the British Biochemical Society and the Jimenez-Diaz Prize by the Fundación Conchita Rábago (Spain).  He was named as one of 25 Greatest Global Living Indians by NDTV Channel, India in 2013.

Prof. Venki was elected President of the Royal Society in November 2015 for a five-year term. In 2018, he published his book titled, “Gene Machine: The Race to Decipher the Secrets of the Ribosome,” noting the highlights of his research of the ribosome.