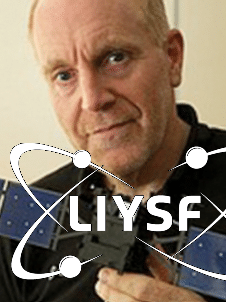 Professor McCaughrean works as the Senior Scientific Advisor in the Directorate of Science & Robotic Exploration, the home for all of European Space Agency’s space science, astronomy and solar system missions. He is an infrared astrophysicist and his research focuses on the formation and evolution of stars and their planetary systems using observational studies from state-of-the-art ground and space-based telescopes.

His primary role at ESA is to communicate the scientific results from ESA’s astronomy, heliophysics, planetary, and fundamental physics missions. In tandem with that, he is responsible for communicating with the European research community regarding their current and upcoming missions and advice the Director of ESA on that, in order to help future missions’ plans and developments.

Mark is also in charge of the outreach and education of ESA’s missions, owing to which he regularly speaks at international colloquiums about several of the ESA missions, including their well-known mission of the Rosetta space probe which landed on comet 67P (which has since been commonly referred to as comet Rosetta), the treasure trove of high-resolution photographs that it provided and the possible future of other such comet-chasing missions.

As a young student in the 1960s, Mark always dreamed of being an astronaut. He was fond of science-fiction and was ever curious of the world that surrounded him. It was this passion of his, along with some proper encouragement from his primary school teacher, Chris Norris, which propelled him to take up a career in the sciences.

He won a scholarship from the Royal Air Force, which enabled him to learn to fly, an experience which further motivated him to take up astronomy as his career. During his undergraduate, Mark did a project on electronic imaging in astronomy, using a camera called the Charge-Coupled Device. This was the first time he was exposed to photography, which he pursues as a hobby even to this day and regularly clicks several stunning photos, not only of the sky but the landscapes as well. He uploads his photos to his Twitter and other photography platforms.

Mark obtained his PhD from the University of Edinburgh in Scotland and has since worked at the NASA Goddard Space Flight Centre, and then at various German astronomical institutes in Tucson, Heidelberg, Bonn, and Potsdam. Before joining ESA in Noordwijk in 2009, he was a Professor of Astrophysics at the University of Exeter, UK for five years.

During his career as an astrophysicist, Mark has worked with some of the biggest telescopes in the world, in Hawaii, Chile and Arizona. One of the high points of his career was his work with Professor Bob O’Dell to take the first unambiguous images of proto planetary disks orbiting around young stars in the Orion Nebula using the Hubble Space Telescope.

He is an Interdisciplinary Scientist on the Science Working Group for the NASA/ESA/CSA for the James Webb Space Telescope. He has been very closely involved with this project for over 20 years now, and has enormous expectations from this giant successor of the Hubble Space Telescope to do some marvellous astronomy covering almost the entire multi wave length spectrum.

Mark has been heading the Space Science Communication Team, which is a small team of just eleven scientists, for over eight years now, and are responsible for communicating the results of over 25 current and future space missions. Seeing the positive results from past missions such as Herschel, Planck, Gaia, and Rosetta, Mark has high hopes regarding the future of his team in capturing the people’s imagination using astronomy and space science.

Mark and his team have spacecrafts currently orbiting Venus, Mars, Saturn, and Earth, as well as spacecrafts looking at the Sun. His team is working on building spacecrafts for new missions to Mercury, Mars, and Jupiter’s icy moons. Further, he is involved in building new space telescopes, of which, some will be searching for Earth-like planets in orbits of other stars. One of their recent launches, the Gaia Milky Way Surveyor, is operating as far as 1.5 million km from Earth.