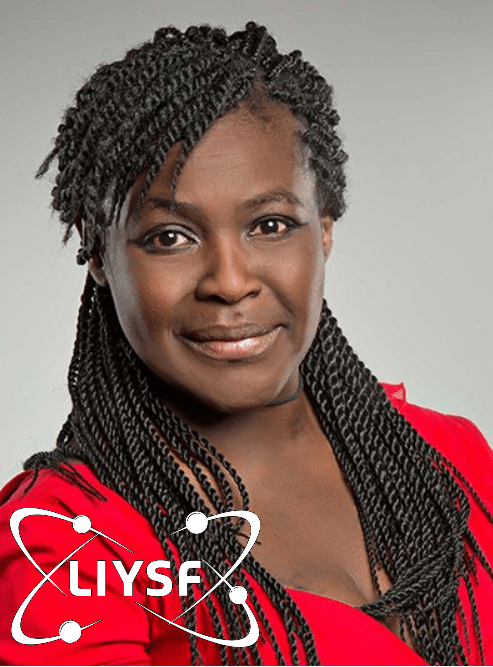 We are delighted to welcome Dr Margaret Ebunoluwa Aderin-Pocock MBE to LIYSF. She is a celebrated British space scientist, mechanical engineer and science educator. She has regularly presented on TV and since 2014, she has co-hosted the world’s longest running astronomy documentary series for BBC, “The Sky at Night.

Prof. Maggie is an honorary research associate in the department of physics and astronomy at University College London (UCL), where she also works as a science communicator on documentaries like BBC’s “Do We Really Need the Moon?” Previously, she worked as a space scientist at Astrium Ltd, but she quit after the birth of her, now 11-year-old daughter, Lauren.

Prof. Maggie was born in London to Nigerian family, but she grew up bouncing from one part of the country to another due to her parents getting separate at an early age. In fact, she attended 13 different schools before she turned 18. What made matters worse was that she was diagnosed with dyslexia at the age of 8. Her constant moving made her hate school as a kid, and being a dyslexic, she was not very good with her reading and writing skills either.

But fortunately for her, Prof. Maggie was inspired by science and had a great aptitude for it. With the strong support of her father, she progressed well in her class and successfully obtained a BSc in Physics from Imperial College London in 1990. Being a more practical and hands-on student, she took a telescope-making class in the final year of her undergraduate, which motivated her to pursue a career in the area of optics. When she found an interesting project in the same field in the mechanical engineering department, she was quick to take it up for her PhD, which she finished in 1994.

During her PhD at University College London, she worked on the development of an ultra-thin film measurement system using spectroscopy and interferometry to the level of 2.5 nm. Her research applying novel approaches to improve the optical performance and the mechanical design of the system, as well as the development of control and image processing software. Even today, her research looks to creating novel, bespoke instrumentation which range from optical sub-systems for the James Webb Space Telescope to hand held landmine detectors.

During her time at Astrium Ltd, she led the optical instrumentation group, running projects that measured wind speeds in the Earth’s atmosphere with satellite sub-systems. She held a UCL science in society fellowship from the UK Science and Technology Facilities Council. She also established and runs her own business, “Science Innovation Ltd”, where she engages in space science public engagement, so far addressing over 250,000 students and science enthusiasts across the globe.

In 2009, Maggie was honoured as a Member of the Most Excellent Order of the British Empire (MBE) for her work as a science communicator, breaking down complex scientific topics into simple information that everyone can comprehend, and for her outreach to young students. She is often quoted saying, “Imagine a dyslexic from London meeting the queen of England.  It’s mind-boggling stuff, but that shows how much potential you have.”

In 2020, she was awarded the Institute of Physics: William Thomson, Lord Kelvin Medal and Prize for her public engagement in physics. She is the first African woman to win a Gold Medal in the Physics News Award. In addition to her most recent award, she has also earned the title of the President-Elect of the British Science Association.