When going through the registration process for LIYSF, I must admit I was slightly sceptical about the testimonies and claims made on the website.   I have attended a number of university courses in the past that have branded their courses as ‘life changing’ and talked of their participants being ‘the future leaders in their field’, and whilst they were interesting and useful, they were arguably guilty of exaggeration.   LIYSF, on the other hand, would have me eating my words just a day or two after my arrival.

The programme of events I received on arrival to the forum revealed just how much fun was to be had over the coming two weeks.  Nearly every day was jam packed morning-to-evening with lectures, scientific visits, debates, optional excursions and celebratory events.   The opening ceremony in the Royal College of Music’s Britten Theatre, where participants waved the flags of the countries they represented before an introductory lecture, set the scene for the wonderful two weeks ahead.

The lectures varied greatly in both their subject matter and presentation.   Many were led by scientists at the top of their field, involved in ground-breaking research.  As a student interested in Biology and Medicine, the lectures that were particularly appealing to me included one concerning developments in exploiting antibodies for treatment of a variety of diseases, as well as a lecture on our expanding understanding of pain.  However, what was truly inspiring was the ability of the Forum to spark my interest in subjects that I’d never broached before – lectures on the future uses of the fascinating material that is graphene were intriguing, as was the lecture on the use of fusion power and a lecture on the much talked of Higgs Boson particle, led by eminent physicist Professor John Ellis.  Other lectures were more light-hearted – our inner child was certainly entertained as we watched one lecturer dress up in a multi-coloured fluorescent outfit and another make a bubble large enough to contain a participant. 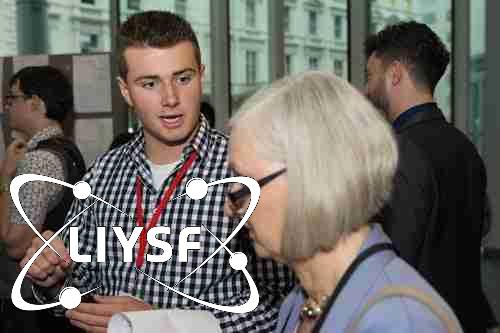 Our learning was supported through visits to various institutions both in and outside London.  The institutions that I visited were:  University College London, during which we tested our pain thresholds by submerging our hands in ice cold water; The John Innes Centre in Norwich, where we heard talks about the latest advances in plant science (in 2008 they genetically modified a tomato plant to produce purple tomatoes containing an antioxidant helpful in preventing cancer and cardiovascular disease!); and the University of Oxford’s neuroscience department, where we looked at how exercise affects intelligence, how we can map brain activity with MRI scanners and advancements in the treatment of Parkinson’s disease.

Aside from being an intellectually stimulating course, LIYSF was just as committed to providing us with a social programme which allowed friendships to be formed that will hopefully last a lifetime.  On campus, on top of two terrific parties, we had an ‘International Cabaret’ night where a number of participants presented a variety of performances.  Inspired by this, we decided to present our own performance on behalf of England at the ‘Songs of Home’ night – in keeping with the theme of traditional national songs and dance, we performed as One Direction and the Spice Girls much to the amusement of the audience.   On top of this we had the opportunity to go on tours of London, trips to Hampton Court and Windsor, a number of theatre trips (I chose the Phantom of the Opera which was fantastic) and a visit to the London eye.   Being one of the only Londoners there meant I could show off all we have to offer during the rest of our free time, so trips to our Royal Parks, Trafalgar Square, the South Bank and Oxford Street were all squeezed in to our busy schedules.

It is hard to put into words just how brilliant LIYSF was.  Even more than two weeks later, I still get frequent pangs of desire to be back with the wonderful friends I met.  Many of us remarked that it was intriguing how in two weeks we’d developed friendships that rivalled those that we’d made in our entire time at school or elsewhere.  The forum has been without a doubt life changing: I have since reconsidered my whole career plan – LIYSF has shown me that there are so many possibilities in science that I’ve yet to consider being a part of.  Not only has it affected my long-term plans, but also the plans for my gap year.  A few Australians have been kind enough to offer me to visit them next year (hopefully their parents will be just as obliging!) which has opened up the prospect of me visiting a continent that I’d barely considered visiting before.  To anyone considering partaking in LIYSF, don’t hesitate!   Believe me, any reservations you may have about being out of your depth intellectually or worries about making friends will dissipate within a day when you’re there!  I still carry the feeling of inspiration that both the lecturers and fellow participants stimulated in me, and urge other students to grasp the opportunity to experience the same