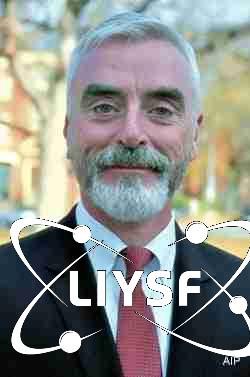 Dr. Michael Moloney is the ninth CEO of the American Institute of Physics (AIP) and was a participant at LIYSF in 1986. He attended the 27th LIYSF as one of ten participants from Ireland. He subsequently returned to give the Keynote Opening Lecture at the 60th LIYSF.

He leads AIP’s programmes, serving the physical sciences community, including AIP’s ten Member Societies. Previously he was the Director for Space Aeronautics at the U.S. National Academies of Sciences, Engineering and Medicine – where in a sixteen year career he worked on about 100 reports on physics, aeronautics, space sciences and materials science. He also spent seven years as a foreign service officer for the Government of Ireland.

He won the Nevin Medal for physics during his undergraduate degree at University College Dublin. He earned his PhD in physics from Trinity College London in experimental physics. He is a corresponding member of the International Academy of Astronautics, an Associate Fellow of the American Institute of Aeronautics and Astronautics, and a Fellow of the American Physical Society. He is a recipient of a distinguished service award from the National Academies of Sciences, Engineering and Medicine. He is a member of the Board of Directors of the Center for the Advancement of Science in Space (CASIS), which manages the International Space Station (ISS) U.S. National Laboratory. He also sits on the Science, Technology Assessment and Analytics (STAA) Inaugural Polaris Council at the U.S. Government Accountability Office.