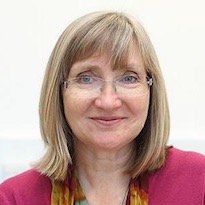 After studying for DPhil at the Clarendon Laboratory, Oxford University Sally Day started working in the field of liquid crystal devices and applications, initially at Thorn EMI then at the then RSRE, Malvern (now Qinetiq). In 1992 she was awarded a Royal Society University Research Fellowship to work at UCL, where she is now Senior Lecturer. She has around 80 refereed journal and conference publications. Her work at RSRE covered improvements in liquid crystal display devices as well as non-linear optical applications of liquid crystal materials. At UCL, in the Optical Devices and Systems laboratory in the Photonics group she has been concerned with the use of liquid crystals in tunable microlenses and wavelength selective Fabry Perot filters. More recently she has been concerned with the application of modelling software developed by the Computer Modelling Research Team of Dr. Anibal Fernadez, which can simulate the performance of liquid crystal devices in 3D. Her work on liquid crystal displays has covered design of Liquid Crystal on Silicon devices, cholesteric polarisers, large area displays for architectural applications and more recently the use of liquid crystals in microwave devices and the optical design of an auto-stereoscopic display. In 2008 she was awarded the Cyril Hilsum Medal by the British Liquid Crystal Society and she is currently the UK Director for the Society for Information Display.