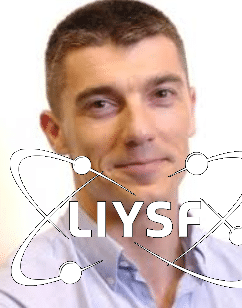 Professor Pete Vukusic is Professor of BioPhotonics & Associate Dean for Education at the University of Exeter.

He formed and leads the Biological Photonics research group at the University of Exeter, whose research looks to understand naturally evolved strategies in using and manipulating light in biological systems.   This research is used to improve existing technologies and to design innovative new optical devices.

Professor Vukusic has received the Lawrence Bragg award of the Institute of Physics and the Kolm Award of the Royal Society. He obtained his undergraduate degree and PhD from the University of Exeter. After he completed his PhD he initially became a physics teacher at secondary school, before returning as a BBSRC David Phillips Fellow, School of Physics, Exeter University. He speaks at events all around the world to a variety of audiences.

The LIYSF Science Bazaar provides an opportunity for participants to present their own research projects and engage in scientific discussions with a community of global young scientists. In 2019, 145 LIYSF participants filled the rooms of the Royal Geographical Society with their inspiring research, vibrant discussions and palatable energy. Passion and curiosity for science were undoubtedly the...

STEM education in the UK has grown in recent years as a curriculum that aims to skill students by presenting a cohesive learning platform that is largely based on real-world applications. It underpins the foundational stage of many sectors, ranging from healthcare to aviation and much more and is often integral to an organisation and thus is becoming an ever-more important field for students. Wh...

Representation in science is imperative for creating solutions that are reflective of the diversity within communities. Young people represent a generation of innovative thinkers, whose voices add value to the global science community, however, are unfortunately not always heard.  “There’s a fallacy that because science is objective, it’s completely devoid of our input and the reality is, ...