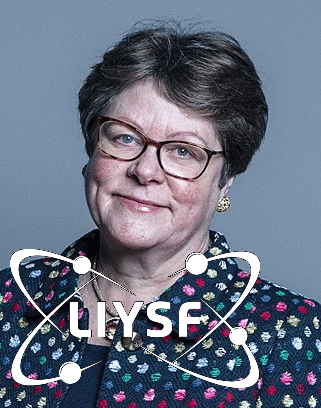 We are delighted to confirm that Professor Dame Julia King, Baroness Brown of Cambridge, will give the Closing Keynote Address at LIYSF. She is a British engineer, with a distinguished career across senior engineering and leadership roles in both industry and academia. She is a crossbench member of the House of Lords and present Chair of the Carbon Trust and the Henry Royal Institute. She was also the vice-chancellor of Aston University between 2006 and 2016.

Prof. Julia was born in 1954 in London. She was educated at Godolphin and Latymer Girls’ School and New Hall, Cambridge, and graduated from the University of Cambridge with a first degree in Natural Sciences in 1975, followed by a PhD in fracture mechanics in 1978. Prof. Julia started her research career at Cambridge as the Rolls Royce Research Fellow for 2 years before lecturing at Nottingham University from 1980 to 1987. She returned to Cambridge University in 1987, where she held several teaching and research positions for the next 7 years.

In 1994, Prof. Julia switched her career from academia to industry when she chose to work for Rolls Royce. During her time there, she held a number of senior executive appointments, including Director of Advanced Engineering for the Industrial Power Group, Managing Director of the Fan Systems Business, and Engineering Director for the Marine Business. In 2002, Prof. Julia was appointed the chief executive of the Institute of Physics and in 2004; she was chosen to serve as the Principal of the Engineering Faculty at Imperial College London. Listed below are the major highlights of her career:

Her work looks to climate change adaptation and mitigation as well as the low carbon economy. Prof. Dame Julia King is Vice Chair of the Committee on Climate Change and Chair of the Adaptation Sub-Committee, member of the Airports commission, UK’s Low Carbon Business Ambassador, and was previously a non-executive Director of the Department for Business, Innovation and Skills. She is also a member of the World Economic Forum Global Agenda Council on Decarbonising Energy, and non-executive director of the Offshore Renewable Energy Catapult.

Prof. Julia was a Board member of the Engineering and Technology Board (now Engineering UK) from 2004 to 2008, during which time she led a Royal Academy of Engineering Working Party on “Educating Engineers for the 21st Century” in 2007. She has also advised the Ministry of Defence as Chair of the Defence Science Advisory Council and the Cabinet Office as a member of the National Security Forum. She has held several more senior public government appointments and works closely with Government on education and technology matters.

She was a non-executive Director of Angel Trains and currently, is a non-executive director of the Green Investment Bank. She was a member of the Greater Birmingham and Solihull Local Enterprise Partnership, the Engineering and Physical Sciences Research Council, and the Board of Universities UK, chairing its Innovation and Growth Policy Network. Prof. Julia was appointed by the Chancellor of the Exchequer in March 2007 to lead the ‘King Review’ in order to examine the vehicle and fuel technologies that, over the next 25 years, could help to reduce carbon emissions from road transport.

In 2010, she gave the Institution of Chemical Engineers 6th John Collier memorial lecture on the challenges and opportunities that surround low-carbon transport. In 2006, she presented the Higginson Lecture. She has been named as an Inspiring Woman Engineer by the Royal Academy of Engineering and was promoted to Dame Commander of the Order of the British Empire (DBE) in 2012 for services to higher education and technology.