Tell us a bit about yourself
I’m Hattie, I’ve just turned 21 and graduated from Durham Uni studying Natural Sciences (with Deepesh).

I live near London with my family and dog (who’s currently begging me for her dinner).
I’ve always enjoyed music and drama having played both the violin and piano at school and having been in various school plays. Another thing that I like but am absolutely useless at is sport. For the past year I was netball captain of one of my college’s teams. Alas, it was not the most successful team in the world!
What areas of science are you interested in?
The area of science that I’m most interested in is Chemistry as I’ve always been a fan of all the bangs and colours! However the thing that’s always attracted me to each aspect of science is how many everyday things can be explained from it. Also how, no matter how much is invested in it, we still have not managed to replicate spider webs to a degree as powerful as nature’s own.
What year did you participate in LIYSF, and what country did you represent?
I participated in 2010 representing England
What were your favourite memories of LIYSF? 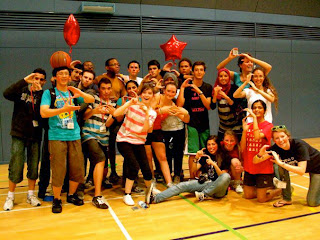 One of my favourite memories was taking part in the Olympiad (afternoon of fun games with one team from each of the halls of residence) and then my team (Beit) winning. One of the funniest (and possibly most painful!) games was everyone bounding along on space hoppers in stupid hats and masks. Everyone fell everywhere but, eventually, one team did manage to cross the finish line to much laughter from the people watching.

What are you looking forward to most during LIYSF 2013?
The thing that I’m looking forward to most is seeing all the staff again as well as meeting the new participants. There’s such a range of people at LIYSF, something that I’ve never come across before or since, and that makes for a fascinating 2 weeks. Everyone’s eager to talk and definitely aren’t the stereotypical nerdy scientist that only wants to sit in their rooms not socialising.
Also, I’m not going to lie, but the full cooked breakfast each morning is always far better than my usual, boring slice of toast or bowl of cereal!